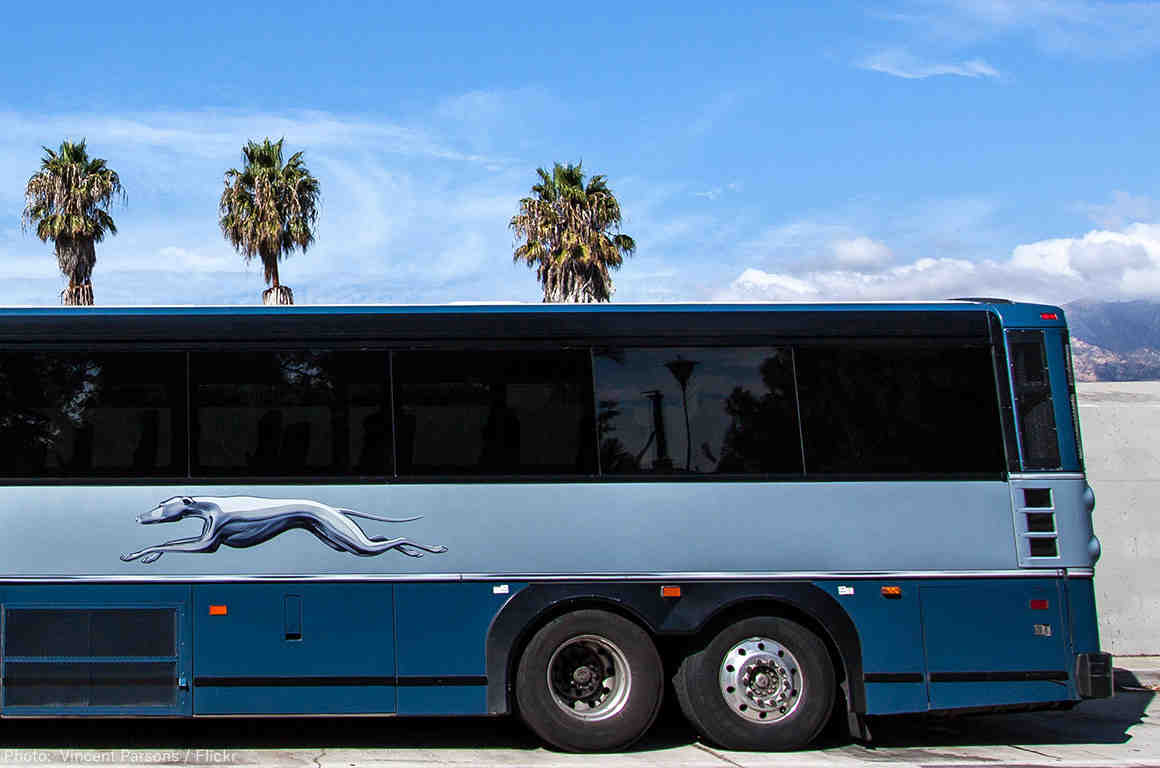 On June 7, Tiana Smalls, whose Facebook profile describes her as owner of Fire Flower Beauty Company, was riding a Greyhound bus from Bakersfield, California to Las Vegas, Nevada. As the bus approached an agricultural checkpoint at the Nevada state line, Ms. Smalls said …

the driver made an unusual announcement:

“We are being boarded by Border Patrol. Please be prepared to show your documentation upon request.”

Ms. Smalls immediately reacted. According to a description she posted on Facebook, she stood up and loudly said,

“This is a violation of your Fourth Amendment rights. You don’t have to show them *shit*!!!”

She then used Google Translate to repeat her message in Spanish, reassuring the Spanish-speaking woman sitting beside her and probably countless other fellow passengers. Border Patrol agents boarded the bus and started to ask the passengers for their “documentation.” Ms. Smalls stood up again and shouted,

“You have NO RIGHT to ask me for anything! This is harassment and racial profiling! We are not within 100 miles of a border so [these agents] have no legal right or jurisdiction here!”

Ms. Smalls’ simple and courageous act of resistance was enough. The Border Patrol agents, realizing that they would face an uphill battle, immediately retreated, telling the driver to continue on.

U.S. Customs and Border Protection officials claim sweeping authority to operate in the interior of the United States. Their basis for doing so is a federal statute that purports to allow CBP officers to undertake certain enforcement activities without a warrant “within a reasonable distance from any external boundary of the United States.” A federal regulation adopted in 1953 inexplicably defines a “reasonable distance” as up to 100 air miles from any external boundary of the United States — an area that sweeps up nearly two-thirds of the U.S. population (200 million people), nine of our 10 largest cities, and several entire states (including Florida, Maine, Massachusetts, and New Jersey). And still CBP cheats its way to more interior encroachment, for example, by claiming that the Great Lakes shared with Canada are “functional equivalents of the border” so that all of Michigan and Chicago are in its reach.

Tell Greyhound to stop letting Border Patrol violate its passengers’ rights! CBP often overlooks basic civics in making this power grab, however. No act of Congress can authorize a violation of the Constitution, which is the supreme law of the land. In general, the Fourth Amendment allows law enforcement to enter business areas that are open to the public. In nonpublic areas, however, law enforcement officers must have a warrant, consent, or “exigent circumstances” for their entry to be constitutional. Because you need a ticket to board a Greyhound bus, these are nonpublic areas.

In a recent letter to Greyhound’s general counsel, the ACLU explained that Greyhound is not obligated to consent to the Border Patrol’s warrantless and unjustified raids on its buses.

Since Trump took office, CBP activity far from our actual borders has increased significantly. ACLU affiliates in Washington, California, Arizona, Michigan, New York, Vermont, and Florida have reported multiple incidents involving Border Patrol agents boarding Greyhound buses without a warrant or consent, and terrorizing passengers by demanding their papers. These reports indicate that Border Patrol agents routinely engage in racial and ethnic profiling, singling people out for the color of their skin or accents.

We live in dark times. Many people want to stand up for their own rights and the rights of others, but feel unsure about how. Ms. Smalls’ experience, like that of two brave women in Montana last month, teaches us that sometimes knowing one’s rights and speaking out with confidence delivers truth to abusive power. Understandably, many people feel intimidated in the presence of law enforcement officials, including federal immigration agents. Here are some effective ways to stand up for what’s right.

Familiarize yourself with your rights when encountering immigration officials and other law enforcement. And then teach your friends and family what you’ve learned, so they know their rights too!

Find a friend and role play with each other, taking turns acting out the “bad cop” role. It may sound silly, but practicing what you would say out loud in a safe environment can help you feel more empowered when confronting law enforcement officials who are abusing their authority and violating your constitutional rights.

The First Amendment protects the right to record and monitor law enforcement officials engaged in the public discharge of their official duties as long as you don’t interfere with the law enforcement activity itself during your recording. You can use your cell phone’s camera or download an app designed especially for this purpose, like the ACLU of Texas’s new “MigraCam.”

Ms. Smalls’ behaviour is a great example of how a little resistance can go a long way. Never lie to federal officers. Be careful not to physically interfere with or otherwise obstruct law enforcement officers because doing so may lead to your arrest. If you are questioned, remember you can always exercise your right to remain silent.