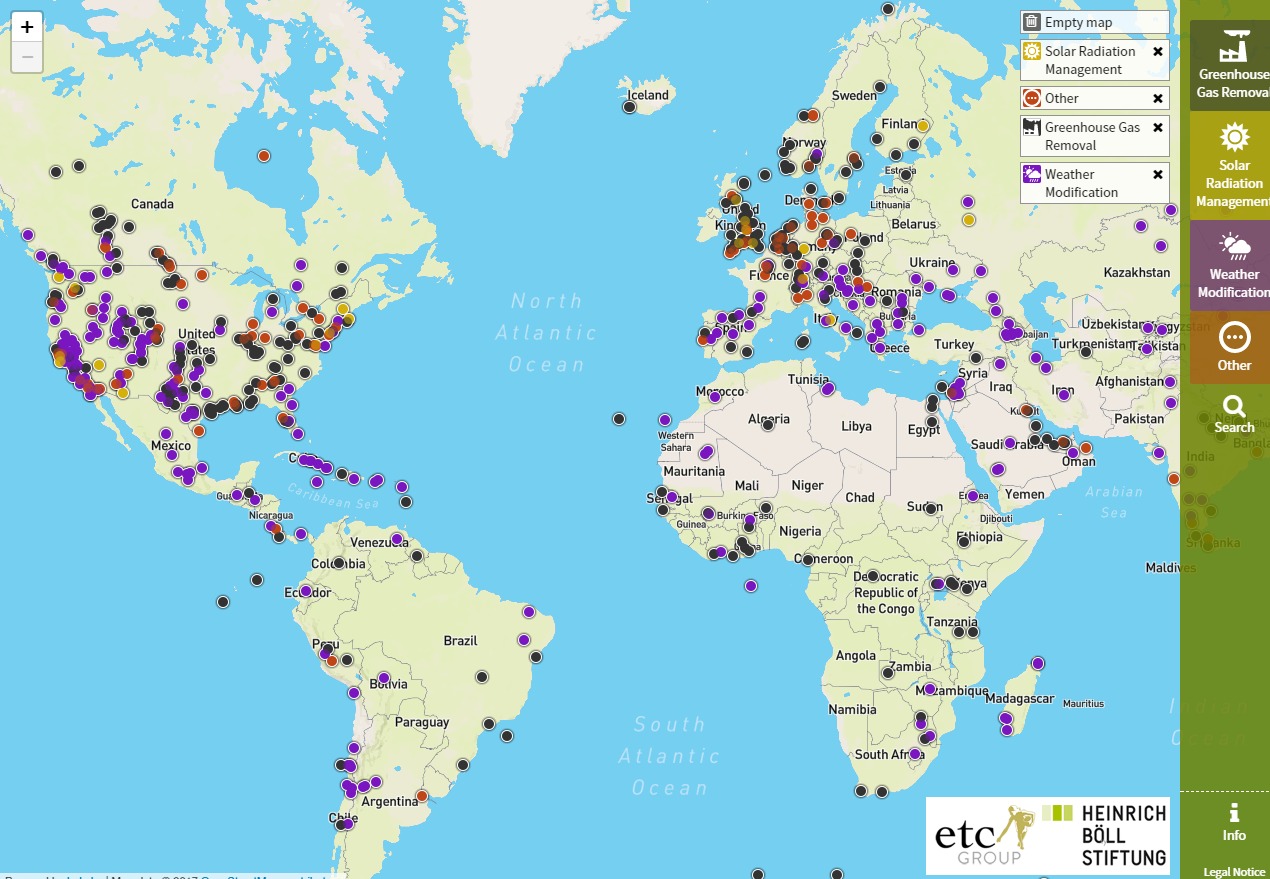 In a widely-supported Manifesto released today, 23 international organizations, six “Alternative Nobel Prize” recipients, and 87 national organizations from five continents called for a halt to testing and political consideration of climate geoengineering. The signatories include Indigenous Peoples’ and farmers’ movements and climate justice and environmental networks, among others.

The Manifesto is being released in the same week that the Intergovernmental Panel of Experts on Climate Change (IPCC) is meeting in South Korea to debate a new report on how to limit global warming to 1.5 degrees Celsuis. Many predict that the IPCC report will promote the use of controversial and unproven climate geoengineering techniques.

Climate geoengineering refers to a suite of theoretical large-scale climate change techno-fixes that could have devastating impacts on the environment, ecosystems and communities across the world. Proponents claim that geoengineering would alleviate the symptoms of climate change either by lowering the Earth’s temperatures by blocking some of the sun’s rays or reflecting sunlight back into space, or by capturing carbon dioxide from the atmosphere to store indefinitely underground or in the oceans.

The concept is largely promoted by a small group of governments, corporations and scientists from the most powerful and polluting countries, who in recent years have been driving geoengineering research; lobbying for geoengineering to be considered as a political response to climate change; and most recently, moving forward open-air experiments to test geoengineering technologies.

The Manifesto signatories dispute the proclaimed benefits of geoengineering and point to the evidence that all proposed geoengineering technologies present high risks and, if deployed, many could even worsen the impacts of climate change. They call for, among other demands:

The movement against geoengineering was born in 2010, when more than 35,000 representatives from climate justice grassroots organizations and popular movements gathered at the World People’s Conference on Climate Change and the Rights of Mother Earth in Cochabamba, Bolivia, and declared their opposition to geoengineering, initiating the “Hands Off Mother Earth” Campaign (HOME Campaign) against geoengineering. Last month in San Francisco, at the Solidarity to Solutions Week devoted to grassroots solutions to climate change, a broad alliance, including the Climate Justice Alliance and the Indigenous Environmental Network, vowed to amplify and reinvigorate the HOME Campaign. This was deemed essential because of the growing presence of climate geoengineering in negotiations and among academics, including the proposals for open air testing of technologies.
A renewed international movement has been launched to stop geoengineering and to stand in solidarity with the communities and organizations resisting geoengineering experiments.

“Geoengineering projects are supported by some branches of industry because they claim to offer a fix without having to phase out fossil fuel use or reduce carbon emissions. Geoengineering does nothing to address the root causes of climate change. It is part of an effort to profit from the climate crisis. We should vigorously work to expose the risks involved with these projects and make sure that they are not implemented. Geoengineering takes us down a path that is false, unproductive, and dangerous. We say: Hands off Mother Earth!”

Karin Nansen, Chair of Friends of the Earth International

“Geoengineering is a dangerous and risky distraction from real solutions to the climate crisis. We need a complete transformation of our energy systems, food systems, economic systems. But rich countries, transnational corporations and other powerful vested interests are desperate to divert our attention from system change, and from radical emissions reductions needed at source. Friends of the Earth International rejects large-scale geoengineering as an unproven technology which could lead to land or resource grabbing and dispossession of local communities.”

“As Indigenous Peoples, we are unified in our opposition to all forms of geoengineering. As human beings, we are entirely dependent upon our respectful relationship with the natural world. Everything the dominant world does has far reaching consequences that we cannot predict. We are now faced with many of those consequences from the exploitation of the natural world that threaten the future existence of all life on Mother Earth. To assert that human knowledge has advanced so fully that we can predict with absolute certainty that no harm will be a consequence of our actions is categorically false. Our Indigenous traditional teachings, lifestyles, spirituality, cultures and leadership of our people has sustained us for millennia and will do so for countless future generations but only if the world adheres to the Natural Laws of Creation and the Precautionary Principle.”

“From an Indigenous Peoples perspective, the geoengineering projects we see today are a historical extension of a long history of invasions on our territories and cultures, such as the massacres of the Great Plains of the buffalo in the 1800s and the invasion of Mexico by GMO maize products under NAFTA in 1994. Geoengineering projects fall perfectly within the interests of the governmental, financial, and industrial consortia that has caused the ecological devastation, genocide and territorial dispossession of our Original Nations. With today’s geoengineering flagship projects such as SCoPEx in Tucson, we see the sails on the horizon of yet another flotilla of invasions just like the Niña, the Pinta, the Santa Maria – or the Mayflower. This time it is the sky itself that is being commodified and marketed. We stand in solidarity and commitment to the Cochabamba Protocols in defense of the Territorial Integrity of Mother Earth and we say NO to Geoengineering! We deny consent!”

“Geoengineering proposals are a dangerous combination: carbon dioxide removal technologies that geoengineers propose to remove carbon from the atmosphere aren’t economically feasible, would have devastating impacts for land and environment at the scale required and they will likely not even alleviate climate change. If we pursue them and they fail, geoengineers and climate-polluting governments will then hold up solar radiation management as the only remedy for run-away climate change – a set of highly risky proposals with military origins that can be weaponized. We can see that the US government, the largest historical emitter, is exactly on this track with their mix of climate denialism and aggressive promotion of geoengineering.”

“We know impacts of climate change are dire. Some in the geoengineering clique now claim that the impacts of climate change will be worse even than from geoengineering. But every technofix in the geoengineering arsenal will clearly only make matters worse. Bioenergy with Carbon Capture and Storage (BECCS) is an example: if it were even technically feasible, it would require such vast amounts of biomass that the earth would be denuded of forests and food production would be severely hindered. Also, there is little reason to think that carbon emissions – from fossil fuels or bioenergy – can be securely stored below ground over the long term. We need tried and true solutions including protecting natural ecosystems and supporting community-based conservation initiatives.”

“The mechanical mind of mastery and control is at the root of the ecological crisis, including climate change. It cannot be the basis of addressing the climate problem through more reckless manipulation as geoengineering. As Einstein warned us ‘You cannot solve a problem with the same mindset that created it.’ Our fragile, complex, self-organized Earth cannot be subject to more violent manipulation. In ecological agriculture, which returns organic matter to the soil, we have a non-violent, tested and proven solution to cooling the planet, while growing more and better food.”

“It is unacceptable that while nations suffer the brutal impacts of climate change, profit- driven corporations plan to colonize the sky through geoengineering, deny global warming and lock in climate inaction. The world must be weaned from fossil fuels, cut emissions at source and not permit any manipulation of the climate that has the potential to pile more harm on Africa and other territories.”

Translation of this press release